We went to the water park on the Greek side of Cyprus. It was called Water World and had 18 attractions. The parents let us go on all of them, but we didn’t go on the “THE FALL OF ICARUS” (A.K.A) the half pipe because of two things. 1: it was closed for most of the time we were there. 2: there was a really long line.

First, we went on a doughnut ride where you just float around the park. After that, we went on the Minotaur’s labyrinth. It was a huge, slippery jumping castle that you had to climb up to the top of. Once you got to the top of it, you could bounce-slide down. 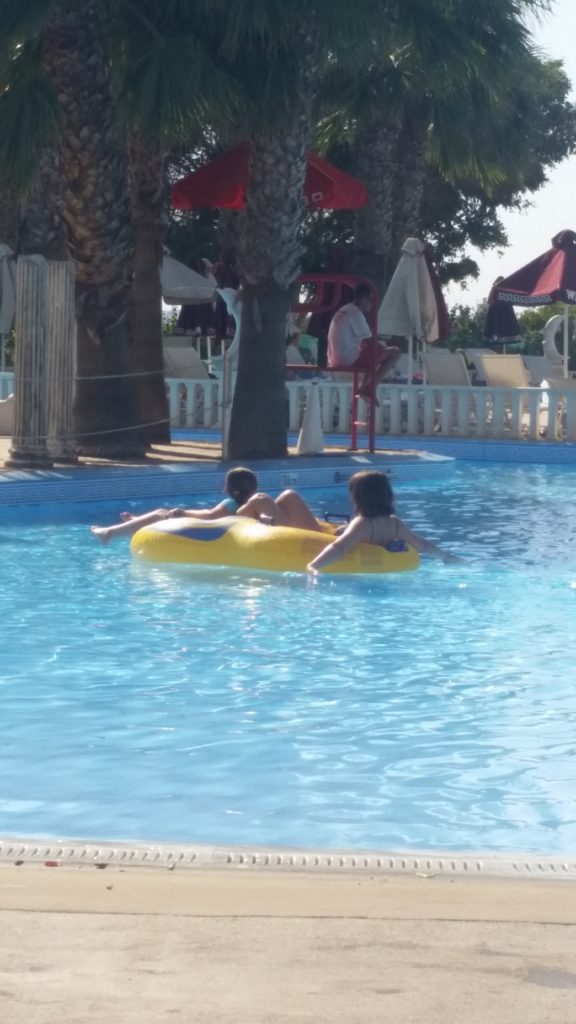 When we finished that, Chloe, Luke and I went on the drop to Atlantis. Chloe was screaming her head off because we were in a pitch-black tunnel and then we suddenly dropped and skimmed across a pool. Next, we went on Aeolos whirlpool. You go down a tube and end up in this big drain. So, you spin around it and fall into a 2.5 metre deep pool. It’s so fun!

Soon after, we went to THE QUEST OF HERACLES. It had two slides that people would race in. Dad beat Luke and Chloe and I tied. I was surprised because dad fit in the really small slide. We went to the serpentine slides next. There were three of them. 1. Titan 2. Medusa 3. Hydra. We went on medusa and hydra but not the titan. 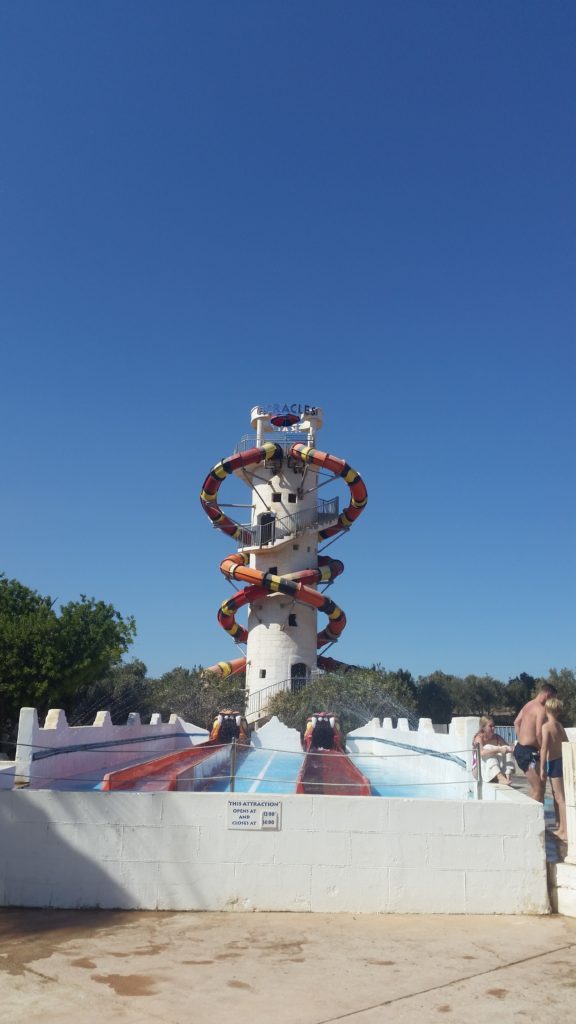 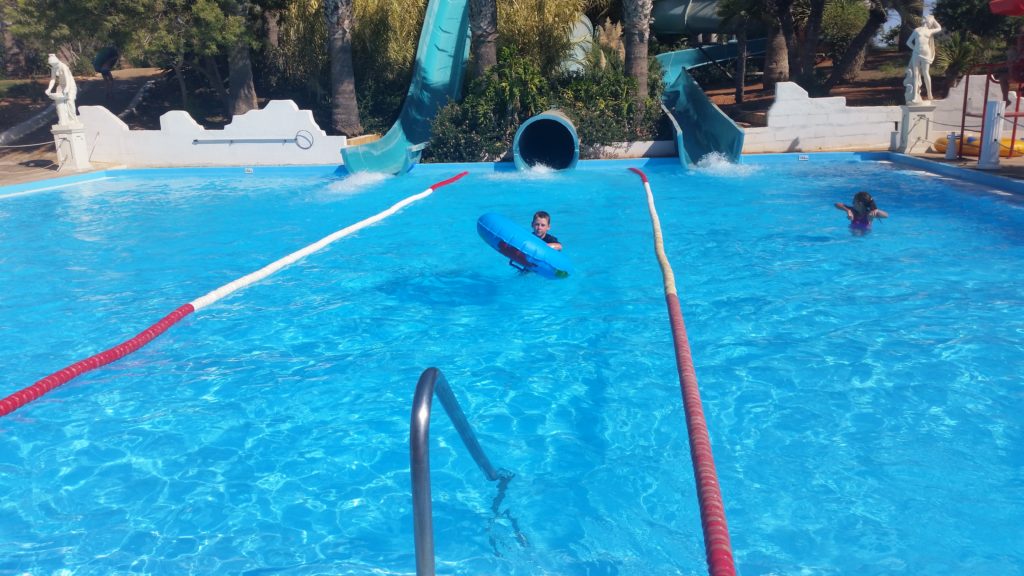 After the serpentine slides, we went to the chariot chase. It’s four slides stuck together that you race in. when Chloe, Luke and I went on it, Chloe went before the lifeguard said “GO!”. When dad went on it, he caught air and went from the middle to the bottom without touching the slide. It was so cool!

Then, we went on APOLLO’S PLUNGE. You go on a four seater raft and slide down. I went down the slide with Chloe and Luke. Even though there were four seats, it was only the three of us. The Apollo’s Plunge was really slow, so it wasn’t as fun as some of the other slides.

Once we finished lunch Luke, Dad and I went on the Drop to Atlantis again. This time, instead of skimming only half way across the pool, we skimmed right to the edge and beached ourselves. We went a lot faster with Dad on our raft.

Waiting for us with a short line were went to the speed slides. They were called Thunderbolt and Lightning. First we went on the thunderbolt. It was a huge drop from 75 metres high. When Dad came down he upset a couple of locals not wanting to get wet because of the big splash he made. 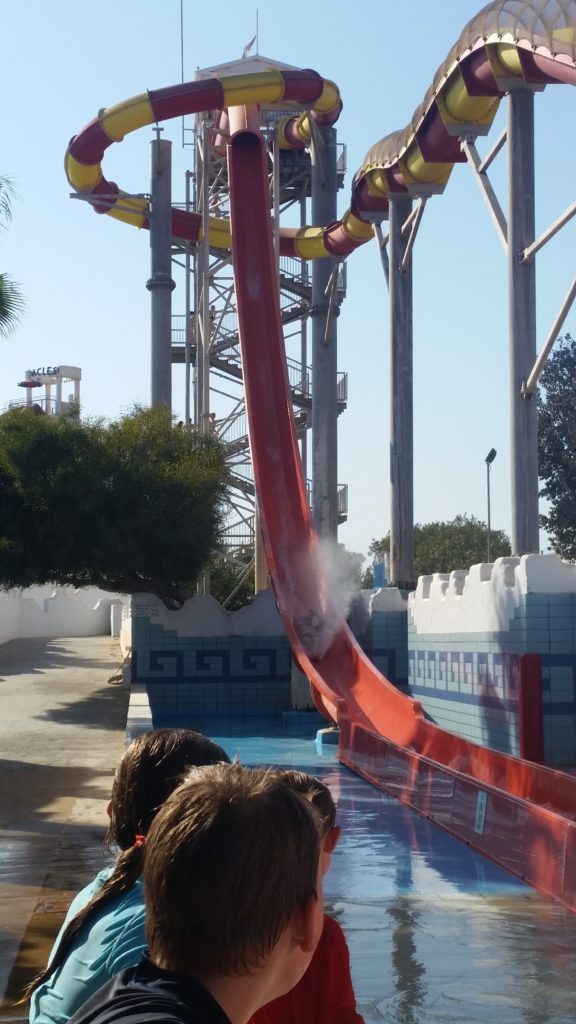 We went on the Lightning ride next. It had a lot of bumps and all of the girls that went down got a huge wedgie. I was wearing board shorts so I didn’t get a wedgie. 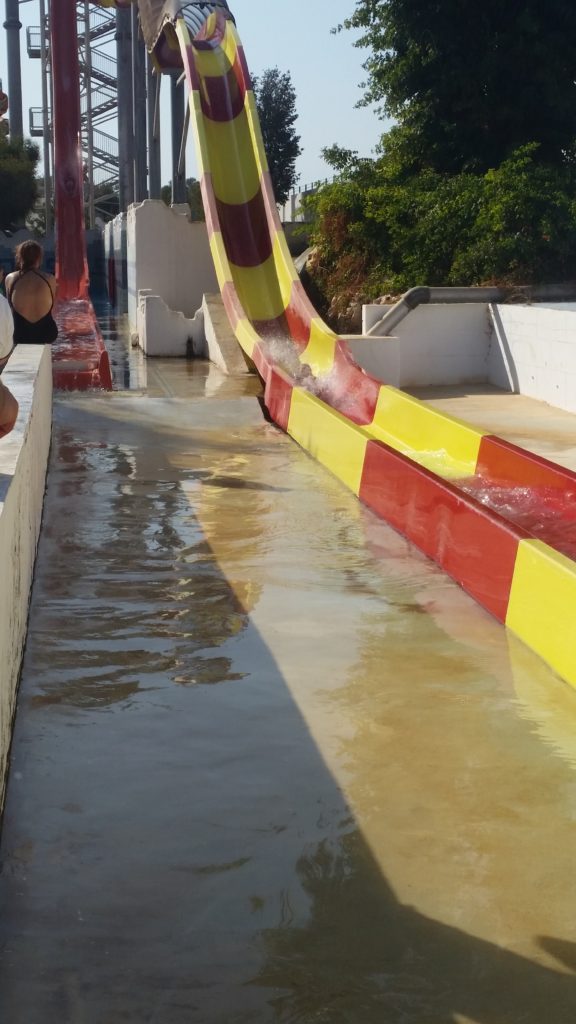 When we were about to go we got a fish pedicure. As soon as Bel put her feet in she took them out and shook the fish off her feet. The fish tickled my feet while they ate the dead skin. My feet felt so much better afterwards. 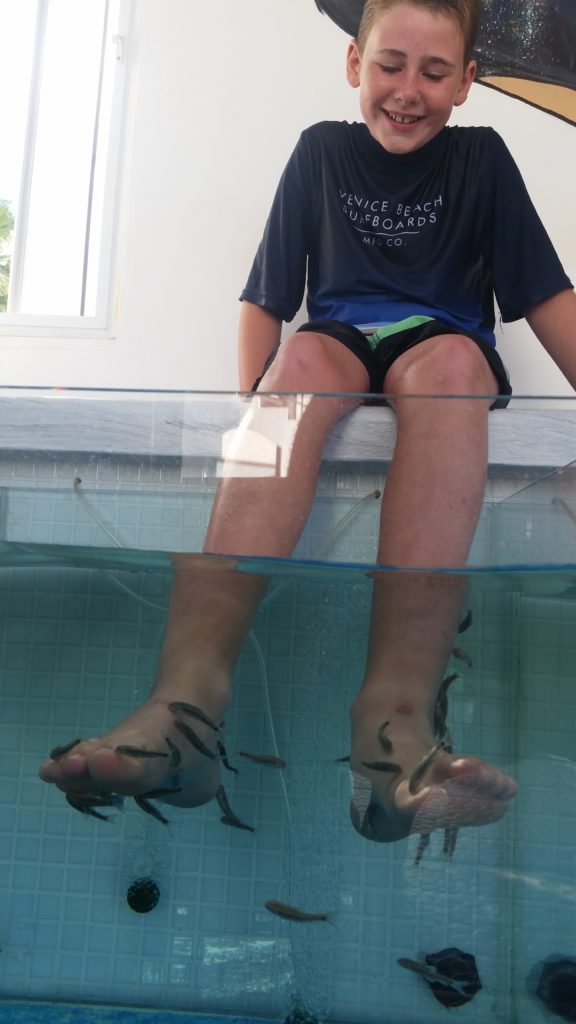 By then it was 3:45pm and we had to get across the border by 5:00pm. If we didn’t get there in time we would have to spend the night in the car and wait for the border to open again. On the way we were in a rush but got lost. Luckily, we made it to the border with less than a minute to spare.

Overall the water park was really fun. My favourite slide was the Thunderbolt or the Drop to Atlantis. It was worth having less than a minute to spare.